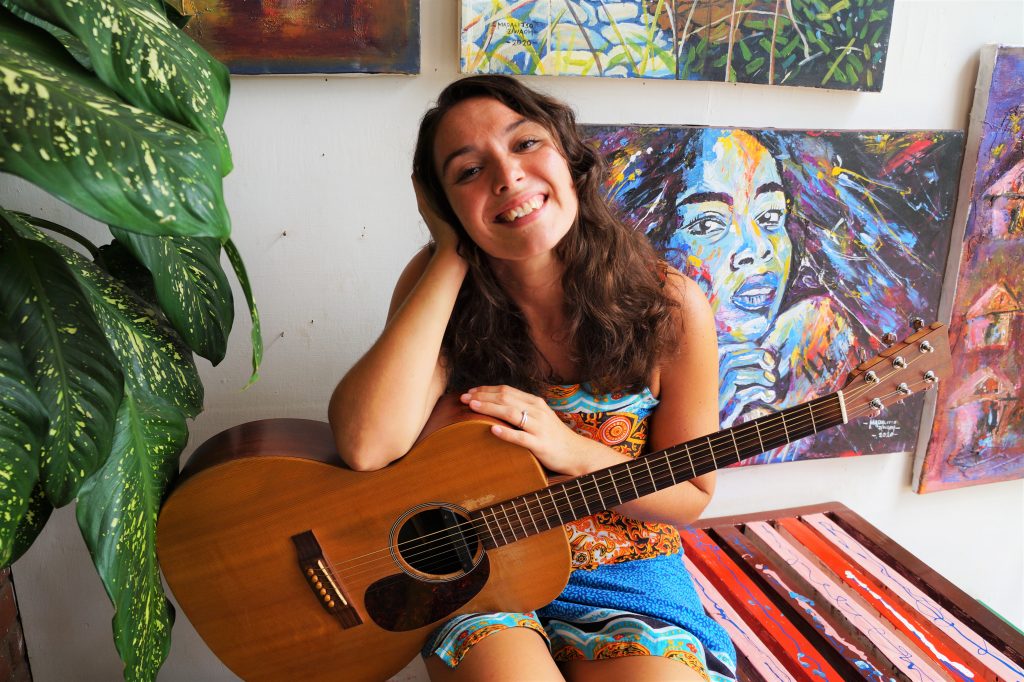 Annemarie Quinn is a singer-songwriter originally from U.K. Drawing inspiration from the likes of Paul Simon and Tracey Chapman, she has honed a style that is uplifting and sun-shining. Taking up guitar, violin and singing at an early age, Annemarie performed her first gig at the age of thirteen. Since then she I has performed at a large number of venues and festivals including The 02 Academy London, The Cavern Club Liverpool, Chris Evans’ Car Fest and Jamie Oliver’s Big Feastival to name a few.

In 2016 Annemarie moved to Malawi, Africa, where she spent the past five years writing, recording, performing and collaborating with a wide and talented range of Malawian musicians to create the album ‘Blue Sky Thinking’.  She performed regularly at venues and festivals across the country including Malawi’s largest music festival Lake Of Stars and Tumaini Festival in Dezleka Refugee Camp.  Featuring over forty musicians and recorded in eight different locations (including on the shore of Lake Malawi!) ‘Blue Sky Thinking’ is five years of experience, emotion and culture. It is the total immersion into a country’s culture, environment and artistic community with one opportunity leading to the next. It is the story of humans from all walks of life connecting, creating and merging cultures. Shakers crafted from deodorant bottles and seeds, brass recorded on the shores of Lake Malawi, homemade traditional African instruments, and musicians including Faith Mussa, Lazarus, Lusubilo Band & Waliko Makhala.

The Jacaranda School For Orphans’ Choir, come together to bring a flare of Malawian sound to a singer songwriter’s vibe, creating this one of a kind album. Every song has a meaning, each recording session has a story of some kind, ones of laughter, friendships and struggle, transport breaking down, power cuts, musicians unable to make the session due to malaria, and some turning up with malaria and recording anyway – you name it, it happened! The title track of the album ‘Blue Sky Thinking’ was chosen as BBC Introducing’s Track Of The Week.

Whilst living in Malawi Annemarie also work as Arts Programmes Director at The Jacaranda School For Orphans funded by Madonna’s charity Raising Malawi, and co-founded the NGO Music Against Malaria, raising funds for health care whilst preserving the cultural heritage of Malawi.

Please follow this link to listen to the full album via Spotify:

“The overall effect is a joyous listening experience that bursts with colour, spirit and soul. A celebration of African musical culture and as well as the wonders of collaboration, Blue Sky Thinking is a glorious discovery that you’ll be thankful exists to remind you that sunny days aren’t far away.”  – E/O Review