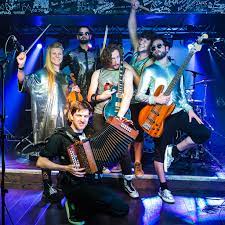 The COATS OFF TOUR

“Hold on to your tri-corn hats and be prepared to stamp your wooden legs – Blackbeard’s Tea Party are back at The Lowdham Indoor Arena!!

Sea-shanties will be given a bombastic rock edge, and folk instrumentals will become late-night floor-fillers when this raucous bunch of reprobates hit the stage. They have dirt under their fingernails and a twinkle in their eyes, and you can expect fantastic musicianship, playful choreography and an unstoppable urge to move your body.

Two drummers, electric guitars, fiddle, melodeon and 4-part harmonies combine to create music that is drenched in tradition, but filtered through a kaleidoscope of modern rock and pop.

Established as the go-to band for late-night folkin’ shenanigans, Blackbeard’s Tea Party have played memorable sets at Glastonbury, Cambridge Folk Festival, Fairport’s Cropredy Convention, The Rainforest World Music Festival in Borneo and many more. Playing with a brand new line-up since 2021, their most recent album Leviathan was released in 2018.

Chicken on a Raft!!!!  https://youtu.be/zRI2vUTNBwc