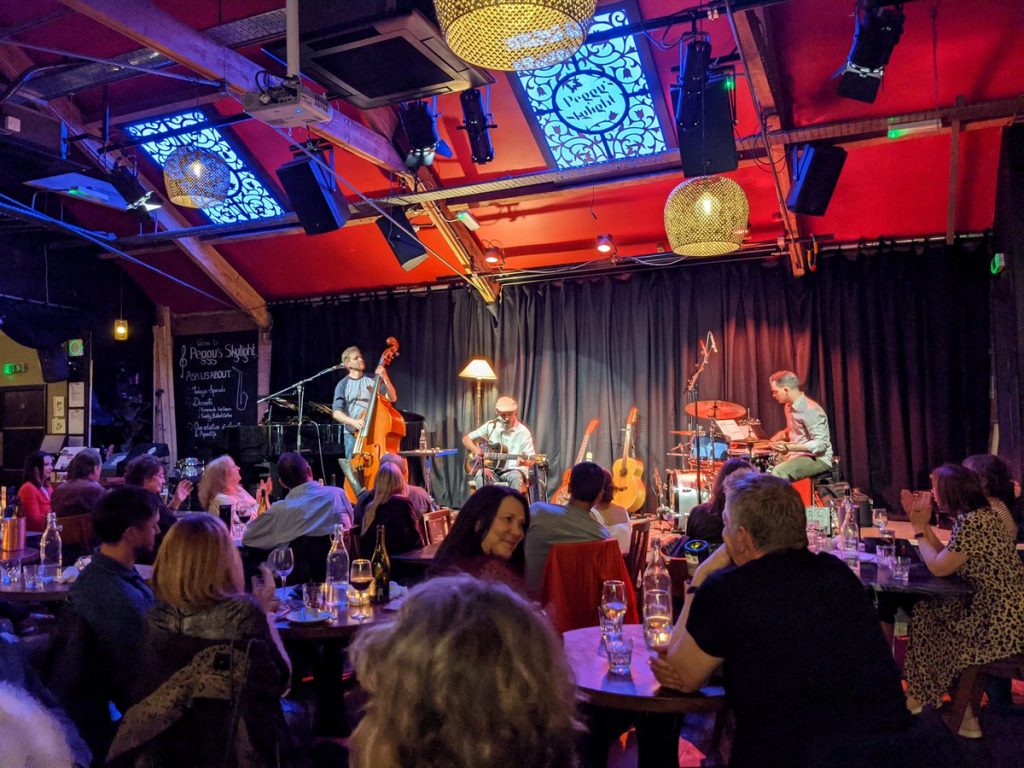 MARK CAME TO PLAY AT THE SHIP AND WENT DOWN A STORM.  DURING A CHAT IN THE BAR AFTERWARDS HE MENTIONED HE ALSO TOURS WITH A BAND!  SO – WE JUST HAD TO INVITE HIM BACK FOR MORE OF YOU TO ENJOY THIS TALENTED GROUP.

There is no one in music quite like Mark Harrison. With his band, or in solo or duo form, he is widely considered one of the most original and interesting artists currently operating in the UK. His highly individual, all-original music goes down very well with audiences of all kinds, and it has taken him and the band to some of the top venues and festivals in the UK, attracting acclaim wherever he goes. Recent appearances on BBC Radio 2, as guest on Cerys Matthews’s show and on Anneka Rice’s Pick Of The Week show, have further added to his growing reputation.

Described at BBC Radio 2 as ‘quirky’ and an artist who ‘makes you think afresh’, and by one eminent reviewer as ‘approaching national treasure status’, Mark is a totally original songwriter, a stunning guitarist, and a master storyteller.

Mark is a songster, and his songs cover all manner of non-standard subjects. With catchy tunes, lyrics than intrigue and engage, and striking rhythms, they make you smile, think and move. He takes elements of roots music, including folk, blues and gospel, to create something new that is very much his own genre. Each song is a snapshot of life or has a story to tell, like a 3-minute film or novel.

‘Between the songs he had everyone laughing their heads off, I’ve never seen that kind of level of interaction from an audience anywhere’. – Ian McHugh, Blues Is The Trut

‘he is one of Britain’s quiet gems and deserves to be heard’ ‘Mark writes songs that sound as though they are Blues staples from the late twenties and thirties but his themes are as much ‘now’ as ‘then’ and with a sympathetic group of musicians he makes a noise that really is timeless.’ ‘songs that will pull you in to the stories … the songs are the real stars – Music News